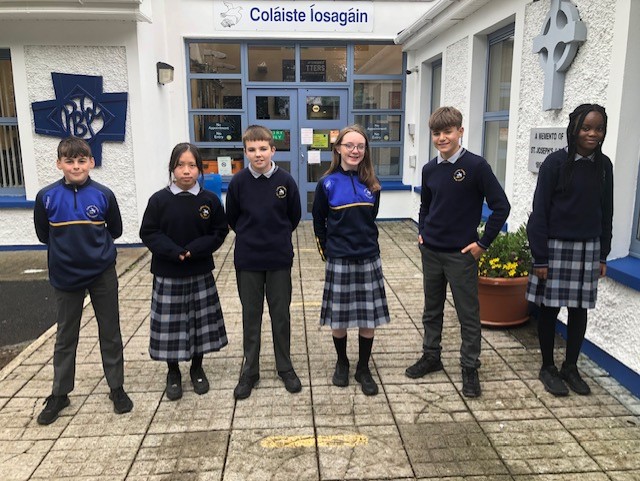 This article was published in the Irish Daily Mail on Sunday 23 January 2022. It is a piece by Justin Brown, Deputy Principal of Coláiste Íosagáin, Portarlington.

Catholic schools will always bring out the best in everyone

Our school, Coláiste ĺosagáin in Portarlington, along with every Catholic primate and post-primary school on the island, will celebrate Catholic Schools Week from today until next Sunday.  This year’s theme ‘Living Life to the Full’ captures the positivity that we can all now enjoy as we leave the social restrictions caused by the global coronavirus pandemic.

Each day during Catholic Schools Week there will be a specific celebratory focus on living life to the full: with God on Monday, each other on Tuesday, with grandparents on Wednesday, ‘in wonder and awe’ on Thursday, and on ‘facing to the future’ for Friday.

In Coláiste ĺosagáin we have a lot to celebrate.  On 13 September last we marked a historic day in the life of our school.  We welcomed Martin Murphy and some of the panel of the Portarlington GAA team who had won the Laois county final the previous month.  Most, if not all, of the panel were past pupils and the team captain Keith Bracken was not only a past pupil but also a present member of our teaching staff.  The team proudly held aloft their winning cup.

However, theirs was not the only piece of silverware on display.  Although much smaller in size, but not in significance, there was an Olympic medal.  The owner of that medal was another past pupil of ours, Nicole Turner, who had just returned from the Paralympic Games in Toyko, having taken silver in the fifty metre Butterfly. 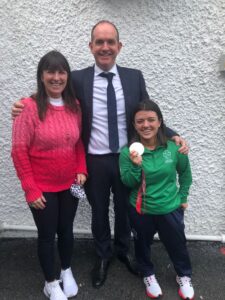 We are immensely proud of Nicole.  It is not every school that can claim to have an Olympian as a past pupil.  In her address to our students on that September day, Nicole spoke about her success and the importance of determination and dedication.  Nicole said whatever dreams young people have, it is important to keep chasing them and that dreams can come true one day.  Nicole’s advice was that if you keep working hard at something that you love, you will eventually get the outcome that you want.

Nicole’s philosophy is one that we can apply at any age and in any sphere of life – not just sport.  Nicole most certainly did chase those dreams with dedication and determination.

But success doesn’t occur without perseverance.  My abiding memory of Nicole is seeing her leave school every day just before the bell so her Mam could avoid the school traffic, as they made their way to the National Aquatic Centre in Dublin for training.  Bernie, her equally dedicated and determined Mam, would be waiting for Nicole in the carpark as they made the 160 km round trip every day.  I remember Bernie telling me that, in the car on the way up, Nicole would have an opportunity to do her homework and eat her dinner before she started training for the evening.

One would think that at least both Nicole and her Mam could get a rest at the weekend, but Saturday was even busier as they had to make the journey twice.  They would go up and down in the morning and then make the trip to Dublin in the evening again.  If there was an Olympics for Mammy’s, Bernie would also be a medal winner!

So, you might ask, what is the school’s secret?  Coláiste ĺosagáin is has a large school with a student population of 1,100, which we expect to grow to 1,300.  We are a part of CEIST (Catholic Education, An Irish Schools Trust), a trust involving 106 Catholic schools across Ireland.  Our aim is to promote five key values: of achieving quality in teaching and learning, spiritual and human development, creating community, justice and responsibility, and respect.  We strive to imbue these values in our students.  At our CEIST student conference in March 2017 the keynote speaker was one Nicole Turner, at that time a second-year pupil.  Even back then Nicole was emerging as a one-to-watch for the future.

While a large school brings certain challenges, these are far outweighed by the benefits.  We have a diverse student population: of all faiths and none, rural and urban, from a variety of backgrounds and with different needs and abilities.  We are a rich tapestry and all the better for that mix and variety.  As a Catholic school we celebrate and welcome such diversity.

But Bishop McKeown’s observation did make me think.  Why do I enjoy being an educator in a Catholic school?  Well, day-in and day-out I witness the great work that goes in our school thanks to our committed staff who go the extra mile.  We do so both in and out of the classroom.  We, as a Catholic school, are a community within our wider community.  We are from and for the community.  As a Catholic school we celebrate the victories and achievements – just like Nicole’s.

Justin Brown is a Teacher/Deputy Principal in Coláiste ĺosagáin, Portarlington, a Co-Educational Voluntary Catholic School. He is a former schools co-ordinator with CEIST.

Photo: First Years in front of the school building.